disappointed. thats for sure.
i don't recommend watching New Moon for fans who actually reads the book.

Posted 19 hrs ago by Josh Wigler in Box Office

You don't have to be a mind-reading vampire with diamond-encrusted flesh to know who this weekend's box office champion will be. With "The Twilight Saga: New Moon" in over 4,000 theaters nationwide, there was virtually no chance that the continued romance of Edward Cullen and Bella Swan would fall anywhere short of first place — but perhaps no one could have predicted just how far ahead of the competition "New Moon" would end up.

The second "Twilight" installment has already shattered records and expectations by earning $26.3 million from midnight showings alone, decimating the record previously held by "Harry Potter and the Half-Blood Prince." Additionally, "New Moon" enjoyed the single most lucrative opening day in the history of cinema with $62.2 million, a record previously held by "The Dark Knight." Combined with the midnight intake, "New Moon" has already earned $72.7 million — and the weekend isn't even over.

Box office watchdogs aren't necessarily convinced that "New Moon" will take the record for best opening weekend of all time — that distinction is still held by "The Dark Knight" with $158.4 million — but the "Twilight" sequel is likely to earn the fourth highest weekend, according to Deadline Hollywood Daily. Regardless, "New Moon" will almost certainly have the best opening weekend ever for a non-summer movie.

While Friday surely belongs to Edward, Bella and Jacob, there were other new releases in theaters as well. "The Blind Side" took second place with an admirable $10.9 million, though such a result pales in comparison to "New Moon." Third place belonged to last week's winner "2012" with an $8.1 million intake, bringing the film's domestic total to $89.8 million. "Precious: Based on the Novel 'Push' by Sapphire" earned fourth place with $3.6 million in less than 700 theaters, while newcomer "Planet 51" managed $3.2 million in its opening day.

getting jitterbugs? join the club! i'm hyperventilating just thinking about the film. and its cool that The Twilight Saga opens new doors for new artistes. like Anya Marina who contributed the soundtrack "Satelite Heart". i love her and i uber love that she and Death Cab For Cutie are going to be heard in the movie.
for more uber vampness, visit http://www.twilightthemovie.com
it'll blow your socks off.
enjoy!

IMs of the day

Other men said they have seen angels,
But i have seen thee
And thou art enough.
-G. Moore 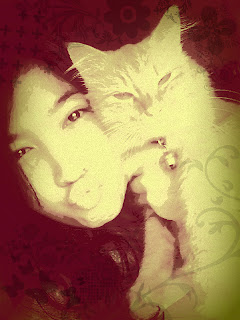 Hey there. my friends at school must be wondering where the hell have i been this whole week and where is my part of the Lisan thing. i'm sorry i'm absent from school, i might suffer from the Monday Blues syndrome everyday of the week. hehe. i'm sorry Anisahuri for making you crazy. you know i love you :) oh and i hope Zkay is still sane without me. gosh i miss you guys but sadly the teachers miss me more :D
What I Do At Home
current best friends; Tetot, Mojo. i think i have fully grasped the art of cat whispering. blame my family, they aren't in the same house anymore. thankfully a friend of mine visits me from time to time. its good to have some mano-a-mano conversation! its hard to have a decent conversation with my bro or sis. our normal family conversation now is via Skype. uhh technology. sometimes you gotta kick it oldschool.
aside from talking to cats, i talk to my guppies too. but its sad though, because one by one, they die and sink to the bottom of the pool. i guess we're not meant to breed guppies anymore :(
ahh yet another project i've been working on these days, cooking! well i'm not a pro, YET, but i practice :D
some goals throughout cooking project/note to self :
thats pretty much it for now. too bad i cant cook some dishes due to lack of ingredients.
besides that, i also go online sometimes and check on my mails and chat with random people. hey, i feel like making a random bucket list now. D:
theres so much to do and so little time. i hope i live long enough to enjoy more pleasures in the world.

it makes me appreciate vandalism.