if you could have one miracle

Ramadhan.
It's leaving, just as fast as it came. And all that's left is the last 10 days of this holy month which is when Lailatul Qadr is said to be present amongst us.

All prayers will be answered during this night. So, what do you pray for?

Often we lose ourselves in the pursuit of the dunya. We wish for materialistic things, and even if we pray for our well-being, like mercy from God and for our sins to be forgiven (which is all great, don't get me wrong), did we stop and think about how that one dua could be a savior to someone else? Someone other than ourselves.

I'm supposed to be reincarnated into a different caste, not born again the same person (by me, I meant my writing)

So, how do you expect one to open up and for you to not do the same?


I'm not really in favor of letting someone else wholeheartedly into my life. I do keep things to my own; my flaws, my problems, my reasons and explanations. But I guess opening up and letting someone in is the fundamental of forming a relationship. We wouldn't have friends if we're like that, eh?

It's not a secret that I bottle things up. I've always had this guard up but am so welcoming when it comes to being there for someone else. I'd empty my "bottles" and let the other person fill them up with their rants, secrets or problems. This is what I am. And this is what I do best. I love to the carry the burden of other people and let no one else carry my own. I love being the shoulder to cry on, the one who wipes the tears away, the one who will listen and give you a hug afterwards.

I take after my mother in a sense that I am always the one who has to be strong for others.
This explains why it's not easy for me to simply let it all out. The rule to being strong: never show your weaknesses.

Now, this is me, saying that I'm exhausted.
I'm tired.
And for once, I wish that someone else would let me in for letting them in.

"If you're being strong for everyone else, then who's going to be strong for you?"

I have no idea. 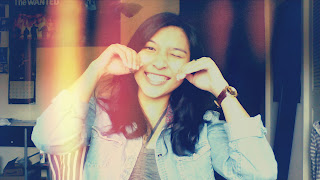 Don't mind me (or the posters at the back, those are not mine). Just having a kitty photo that's all.

No. I don't know what to think right now.

if you need a happy post, don't read this

Today marks the end of my first semester here in Iowa State.
I must say that it took quite a while for me to get here, but in the same time felt like 5 months whizzed before me like a cyclone (pun intended).

Be warned that from here on, this post will be one of those cliche-as-hell-I-just-got-an-epiphany kind of posts. Hey, I'm the new kid on the block here (literally, I will explain), so let me have my have my moment as I contemplate the purpose of my existence in sublime thoughts. Shaiza~

So for starters, let me try and recap what I've been through upon arriving in America conveniently in the form of bullet points:


The list goes on and on. And yes (here it is), I have learned A LOT.
It's funny what 5 months living in a new environment with new people can teach you. I've seen and heard all of the bad, the good, the in-betweens, and more. For every good thing that's happened here, there's always something negative to counter it. I know it sounds like I might be weighing on the bad side of things more and maybe you think that I'm a spoiled brat that has had things easy for her her whole life, but these things tend to bother me a lot. Even so, I'm thankful because if it weren't for these challenges, I'd never mature into the person that I am today.

Homesickness was not in my dictionary until this one day where the universe turned its back on me and left me there to crack in the smallness of my curled up self, under my blankets, frozen and cold as the snow outside my window. Loneliness has its way of swallowing you. It creeps slowly like sunlight during the crack of dawn; slithering past the blindfolds and on its way to the edge of your bed, tickling the edges of your toes and slowly licking you up until it reaches your hair. By then you're consumed with all sorts of thoughts, and like the sunlight, even though harsh on you, still heavenly and hurtful.
Heavenly in a sense that it brightens up the space in your mind, those compartments and boxes of which you tucked in so many things left unsaid, shadowed in the deep corners of your soul.
Loneliness makes you think.
Hurtful in a sense that you've got no one to share it with. All of those compartments and boxes, opened up and liberated during this short period of time with that great urge of laying it all out on the floor, and having that strength, only this time around, to put it all into a puzzle and to understand the complexity of one's being... didn't happen. That hope unfulfilled; those words wanting to be let out, expressed only in strolls of tears streaming down your face like a bleeding faucet.

They say, "wear your heart on your sleeve."
As much as I am an open book, I don't think that's possible. Fret not, spring is in full bloom.
I hope the fields in me will too.

"Still now, I send letters into space
Hoping that some mailman somewhere will track you down
And recognize you from the description in my poems,
And he will place a stack of them in your hands and tells you,
'There is a girl who still writes you
She doesn’t know… how not to.'"

more than anything else

I want to be closer to God.


Why be angry?
Or sad?
Or even think about wanting things

Why?
Since you're not even mine to begin with.

I have no rights.

go easy on me

in an empty nest

there's only so much
this smile could seal
breaking, falling, picking up the pieces again
hanging on moments
of hope
making the best of each one
to keep going
till the next fall

it's like the in between
body being somewhere
the soul elsewhere

silently, shyly,
this small voice begs
go easy on me