i told Babah and Mama! and theyre not mad :D 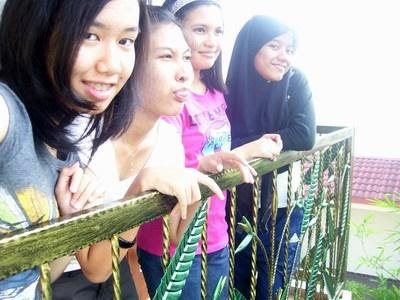 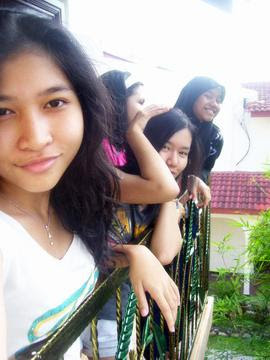 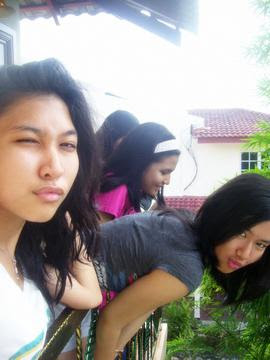 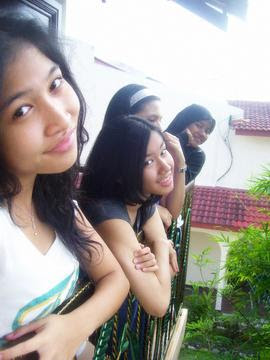 heee i love this one 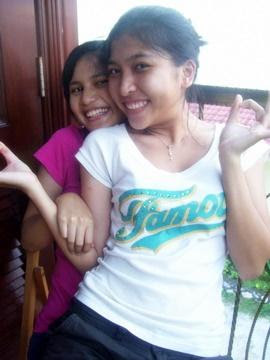 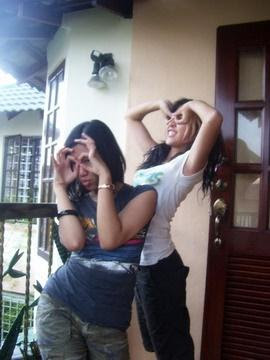 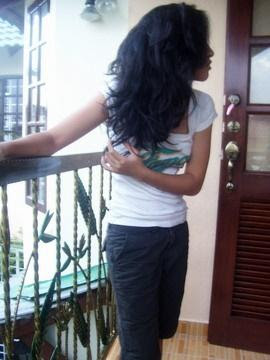 credits to Hana for the pictures. the pictures are worth millions and billions of meanings. you just have to look closely hehe

horton hears a who

i think you all have realized that my posts' titles hardly has nothing related to the post itself. well, yeah. HAHA why am i telling you this

MOVING ON,
i've decided to update my blog today since Hana is nagging on me. dia dah boleh online fuiyoo :p
ngahah

cis. what if i dont update my blog? go ahead and saman me. lalala...

YES and i am gonna talk about that tribe in Cameron. i was watching channel 707 on astro :D
theres this one Chief of this village who married 50 women. thats like, the village itself.
and yes you must be wondering, his children eyh?

112. magic number hoorah xD
i wonder how he lives his life. wealthy in a way. he's the chief wealthy la kan? haha. but the marriage part. 50 wives in holy matrimony. every marriage has its' ups and downs right? in this one, theres of course 50 ups and only god knows how much downs.
i kinda get the feeling that he's muslim cause MAYBE LA he was wearing a ketayap. hrmm.. i shall ponder on this issue for days.

and theres this one other thing.....

SUN EXCLUSIVE: MICHAEL JACKSON has become a Muslim - and changed his name to Mikaeel.

The skint superstar, 50, donned Islamic garb to pledge allegiance to the Koran in a ceremony at a pal's mansion in Los Angeles, The Sun can reveal.

Jacko sat on the floor wearing a tiny hat after an Imam was summoned to officiate - days before the singer is due to appear at London's High Court where he is being sued by an Arab sheik.

A source told last night how Jacko, brought up as a Jehovah's Witness, decided to convert as he used a studio at the home of his chum to record a new album.

The star - whose hits include The Way You Make Me Feel - was spotted looking "a bit down" by a producer and a songwriter who had both embraced Islam.

i cant imagine how is that even possible? seriously unbelievable weyh. i'm sure Allah amazes us all.

hola fellow readers. how was your day today? :) well, lemme tell you mine. hihi

tralalaaa~~~~
my day kicked off with dreadful band practice. Mr. Koh showed up again today. damn. another unexpected visit. and then, after practice, the other Hanan and Zkay and me went to CM to eat. hehe i kempunan tomyam tiba-tiba.

UMM i guess thats it. i'm happy because i get to eat waffles today. DUA KALI PULAK TU. hehehe. just look at my tummy smiling! :D
i have this thing for waffles now. chocolate + butter = yummy wffale filling
then kakak bought bubble tea. it was honeydew flavoured zomg :o
the bubbles are made from tapioca. its not that tasty but its chewy and i cant seem to stop eating those little balls HAHA


so so so...
i guess tomorrow is gonna be same. again. sigh.
at least i get to get out of the house. i'm imprisoned by my own home. wow.
my neighbourhood ni tetibe mcm gossip girl. everyone talks about everyone.
even in this house. yeeesh. its stressful ya know. so thats why i'm always absentminded and ph7 (learned that from Rye :D) all the time. and practices has its advantages. i get to get a piece of my mind once in a while.

i know that maybe you wouldnt read this. cause i know my blog is none of your concern. ha ha.
i just wanted to say, before you leave, try and untangle your problems with whatever.
i want you to know that i'm here for you and youre not alone.
if you want a friend, i'm here.
if you need a shoulder to cry on, go ahead, ruin my shirt.
if you want a place to stay, a roofed sanctuary, my crib is your second home.
and if your tummy grumbles, feel free to open up my fridge.
i just want you to be safe and happy babe.
all i want is the best for you. i feel protective of you.
you can punch me for saying this because i know youre more of the rhino and i'm more of the...fish...
anyways,
whatever that your going to do, dont forget to involve me because you are my business missy.
let me know of your well being okay

after one week of torturing virus sickness (haha), i think i've fully recovered :D
well, to be honest, minus the stomach aches and such hehe. okay okay not 100% sihat yet. ngeh.

thanks pupu for keeping me company and picking me up from school. semangat lebih :p
and i'm reallyyy worried about Rye. she's having a hard time now. and i feel so sucky because i'm a helpless suckish friend! forgive me :(
i wish i could change the way things are, but sadly its out of my power. sorry babe.

band was utterly exhausting. MENTALLY. you can go crazy over there.

*pegang flag/pogostick xD*
"Good Morning Mr. Koh"
"what the.... o.o"
el-shitto. memalukan sial hahaha. i think if i were to be the instructor, i would have hired someone to burn our band room. ladidaaa...


OMG OMG OMG i cant wait for next Monday. circle of friends, come come and stay at my house for a while. i can die of boredom ya know... heee. i'm expecting to see Hana's face, Aiman's face, Ainaa's face and Keanna's face. kurang satu, kita semua kena buat search party. capiche?

i'm craving for good movies. and i wanna watch Twilight again. slap me if you can :p and i'm still short on money kaching$$

toodles. i'm gonna go watch Ben 10. if you think i'm writing crap, then why the hell are you still reading? :D

i went to Lia's yesterday to keep Rye company while she's being dazzled up for prom. heee :D
go go to her blog. spectacular baby! haha

well, i'm sure you had loadsa fun. and youre gonna have more on Tuesday! i wanna menyebok again. call me tau :p

I dont have a life. I regret not waking up when kakak invited me to hang with her the whole day. Big mistake. I ended up staying at home, consulting my brother on playing at his friends' house and maybe gonna start on my holiday essay. MAYBE. Looking at it now, it seems like Izzat has more of a life than i do. I'm broke but at least he has company. Stinky friends of his. They like to blast music loudly like its nobody's business. I Kissed A Girl? What The Hell man.. Do they even know whats a headphone?


Deeply missing my soul mates a lot. Most of Hana's Twilight Saga series are with me. I just need Breaking Dawn then i can claim it as my own collection! KIDDING. Really bummed that your not gonna sleepover at my place piccadilly :( I'm gonna be so lost without you.

Okay then. I know I'm killing all of you with this retarded post of mine. Some posts are not that upbeat anymore. I guess I'm depressed.


Thats it, I'm on a quest on finding my salvation :)

band was...absurdly boring. and not that tiring. since i'm on rest most of the time.
i shall bring my medication tomorrow buddies! do not fear! for my setamols are here! :D

look what i found *smug* 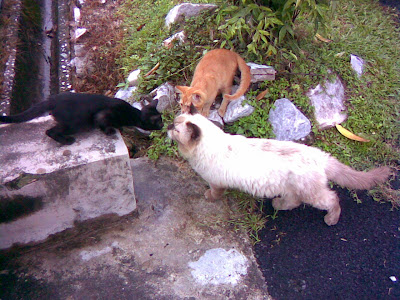 nevertheless! i miss them so. the two on the right side belong to this family. well, used to. they got stolen. dayumm. whoever stole them, shall rot in hell :)

thats it for today. im sorry for this very disturbing post. i cant help it, i'm just weird. bai.

currently healing from stupid fever and stomach aches. sucks having to feel this was especially after Raya Haji. having to lie all day on your deathbed. sort of. jgn marah :p

well, if im really sick, it did come to a point where i wish i was dead instead.


sigh. would it even made any difference?


i just want my mama and babah now. and my arwah datuk.

its just one of those hopeless emo days.

these people are making me psychotic!


and i shall not fail! i'm being difficult. ladidaaa~
hee :)
you cant spank me. i'm just a virgin * innocent face*

sorry la bebeh. i cant go out. because i have no money. i do, but i have to save em up for school. i've practices okayyy. PLEASE BE CONSIDERATE.
tak mcm kawan aku ni;

have you no stomach woman? ( lol tryna sound like "tidak berhati perut". or so it goes.. )
i dont wanna go out to Pavi like a pengemis. whatever i'm gonna spend on is sooo gonna burn a hole in my pocket. ngeheh so i cant go :)

I DONT HAVE MONEY LA.
pity me. sigh.

so you guys have fun without me. heeee * angelic smile *

i'll tremble for my love

and i cant help it too.

i finished reading Twilight. victorious me :)

now i know. yes,i admit and to my defeat, i am captivated by the beautiful Edward Cullen. i thought it wasnt possible, but the writer delivered the book with such seductive flare. damn, im caught! wait scratch that, it practically BURNT ME ALIVE D:
he was perfection. by the time you finish this book, you'll crave for more. suddenly, Edward is your new brand of heroin. *drool drool drool drool*

and future readers of the Twilight Saga ( you cant stop once you only read one book ), dont cry. HAHA. yes you will get jealous and you cant possibly ignore the amount of envy that mountained up inside you. lol. (wtf am i crapping) anyways, jangan bakar boyfriend anda jika dah baca buku ni. clear warning. har di har har

DEAR HANA; i'm waiting for my New Moon :)
speaking of moon, yesterday my uncle said it was on the news. there it was, in the sky, Allah painted it with two other stars. the two stars were next to each other shining brightly and the moon was shaped like a smiling mouth. so, altogether, it looked like a smiling face without no nose of course. it was superbly cute :D
too bad we own no hebat camera.


I’ll seek you out,
Slay you alive
One more word and you won’t survive
And I’m not scared of your stolen power
I see right through you any hour