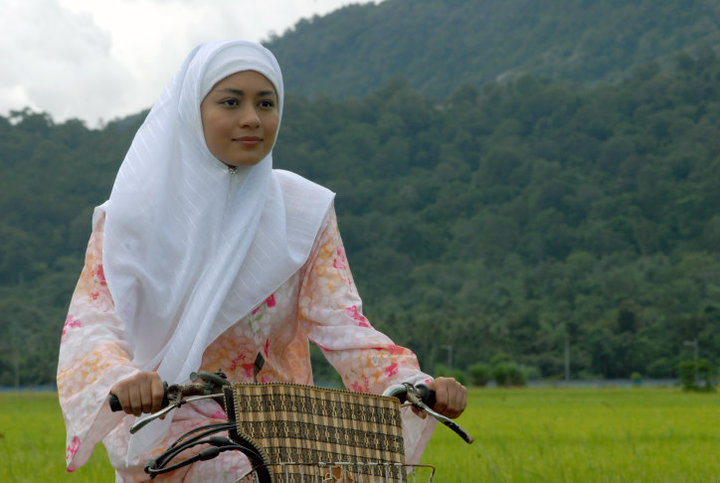 The first few scenes of the movie depicted Izzah's life in her hometown, her kampung.
They showed her daily activities; teach children how to read the Qur'an as an ustazah, riding the bike to and fro where she taught and where she resided with her uncle and aunt and also her hardships in taking care of her sick aunt. It's a tough life but that's not what I'm going to talk about here in this post.

What most of you do not know is, I have a want, a yearn, for that simple kampung life.

I'm a city girl. I was born and raised in KL. So you must be thinking, "I don't think she'll survive...".
Oh come on, I've stayed in my kampung where you had to go outside the house in order for you to go to the loo okay. A furnished bathroom with an exceptional built-in drainage system would be fantastic and a plus if you're living in the kampung.

What I love about having to live such a life is getting to wake up and inhale unpolluted fresh air. Walk through paddy fields of vast green that seems to be going on forever. Wear baju kurung everyday. Get a simple job that makes just enough money to support you and your family. Play kites, congkak, hide and seek instead of cooping up in my room going online. Chase chickens and goats around or climb coconut trees. Eat good, simple dishes.
Sigh. The life.
I'll admit that it won't be as easy as it sounds, but I assure you it'll be a content and happy one.

Or maybe it's just me. Maybe I'm too influenced by the pretty pictures displayed by the media. I don't know.
I hope I'll marry a guy who has a kampung. HARHAR.